Skip to content
Date: December 20, 2019Author: It's All One Struggle at Base 0 Comments

The August 2003 third issue of Black Alert was billed as the publication of the Anarchist Black Cross-Anti-Repression Network (ABC-ARN).  It included a proposal for a formal multi-tendency / non-sectarian ARN, within which the ABC would continue to produce Black Alert as an ARN publication. By this stage, the ABC was a “member collective” of the Zabalaza Anarchist Communist Federation (later Front, the ZACF), formed in May. 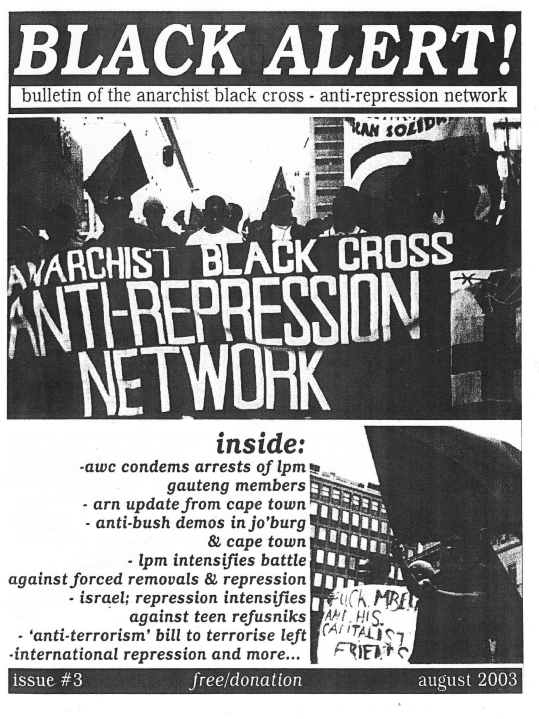 Issue 3 provided considerably more original material and South African anarchist perspectives and reports, and also included on its front an impressive photo of  the ABC-ARN banner prominently displayed at a social movement march:

It also stated on the inside page:

We believe that only through anti-authoritarian, directly-democratic,  decentralised and nonhierarchical organisation(s) and means of struggle will we be able to counter and overcome international repression, which is undoubtedly going to get worse as our struggles advance, by making it difficult for the repressive forces of the State to infiltrate our movements and imprison or remove our ‘leaders’. because we are all leaders.

Through these means of organising we will be able to build a decision-making structure from the bottom up and not the top down, as is presently the case. A structure that will be strong enough both to combat the coming repression and overthrow the system of capitalism as a whole, which puts the wealth and power of a few before the lives and needs of billions.

The Anti-Repression Network is non-sectarian and open to any groups, communities or individuals who have already, or could fall victim to State repression. Our aim is to spread awareness around the issues of political repression in Southern Africa and. more importantly, via practical aid to its victims. to build a community of resistance willing to support communities and activists who find themselves targeted by the State, capital or their agents for the roles they play in building a new world or simply defending their homes.

In other words … YOU ARE THE ANTI-REPRESSION NETWORK. Right then, let’s get on with it. The future can and must be ours!

Welcome to my Workspace

This website tracks an open dissertation project that I am currently conducting research for and writing. My research concerns the history of ideas and traditions of community organizing in the movement to abolish the prison industrial complex, and the particular impact of Black radicalism and feminist theories of space, time,  interiority, relation, freedom, consent, and agency in the formation of “PIC abolition” as a nascent political discourse and intellectual milieu.